The West Cork “Big 5” on our Discover Wildlife Weekend 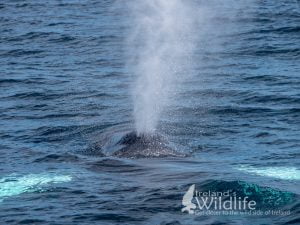 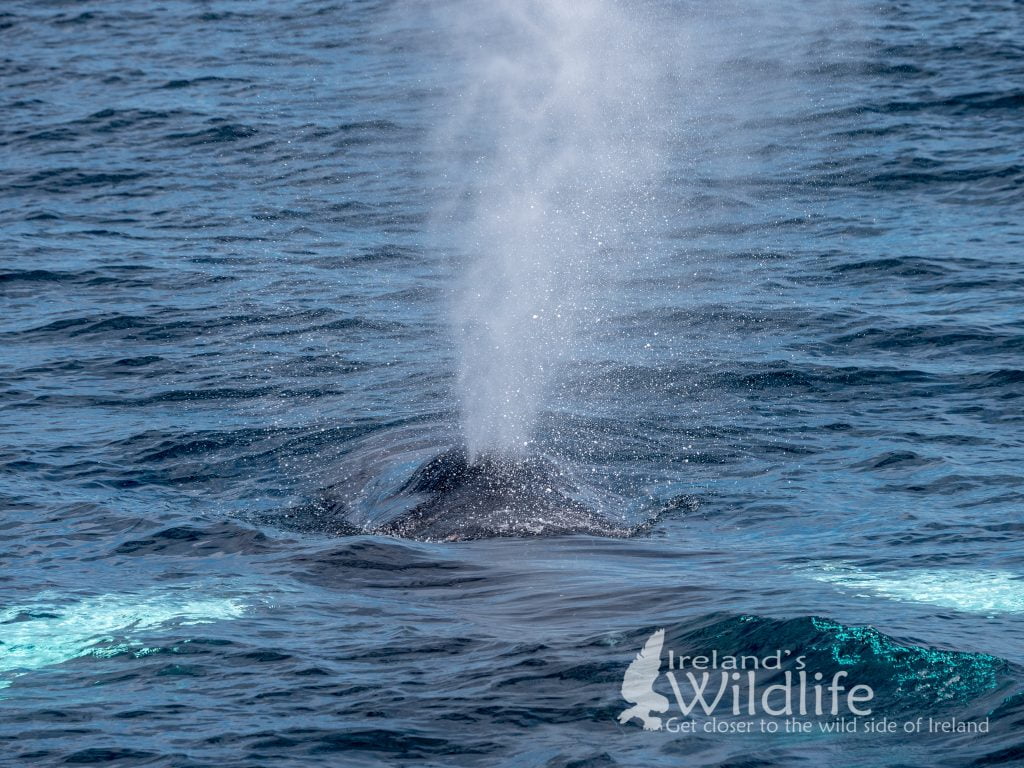 If you’ve ever been on safari in Africa the concept of “The Big 5” will be a familiar one. African Elephant, Lion, Leopard, Rhino, and Cape Buffalo are five of the most iconic mammal species you can see while on safari.

Here on Ireland’s Wild South Coast we have our very own “Big 5” — only our mammals are of the marine persuasion (hat-tip to our friends at Cork Whale Watch who came up with the concept of a marine “Big 5”) and some of them are much, much bigger than their counterparts on the African savannah. They are, in size-order: Harbour Porpoise, Short-beaked Common Dolphin, Minke Whale, Humpback Whale and Fin Whale,  and if you’re very, very fortunate you can sometimes see all five on a single trip off the West Cork coast.

We kicked off our Discover Wildlife Weekend on Friday 20 July with an evening shore-based sea-watch from Cloghna Head near Owenahincha, just a five-minute drive from our home base for the weekend at the Celtic Ross Hotel in Rosscarbery. Conditions were perfect, with calm seas and low evening sunlight lighting up the bay and the open Atlantic beyond; ideal conditions for picking up whale blows. 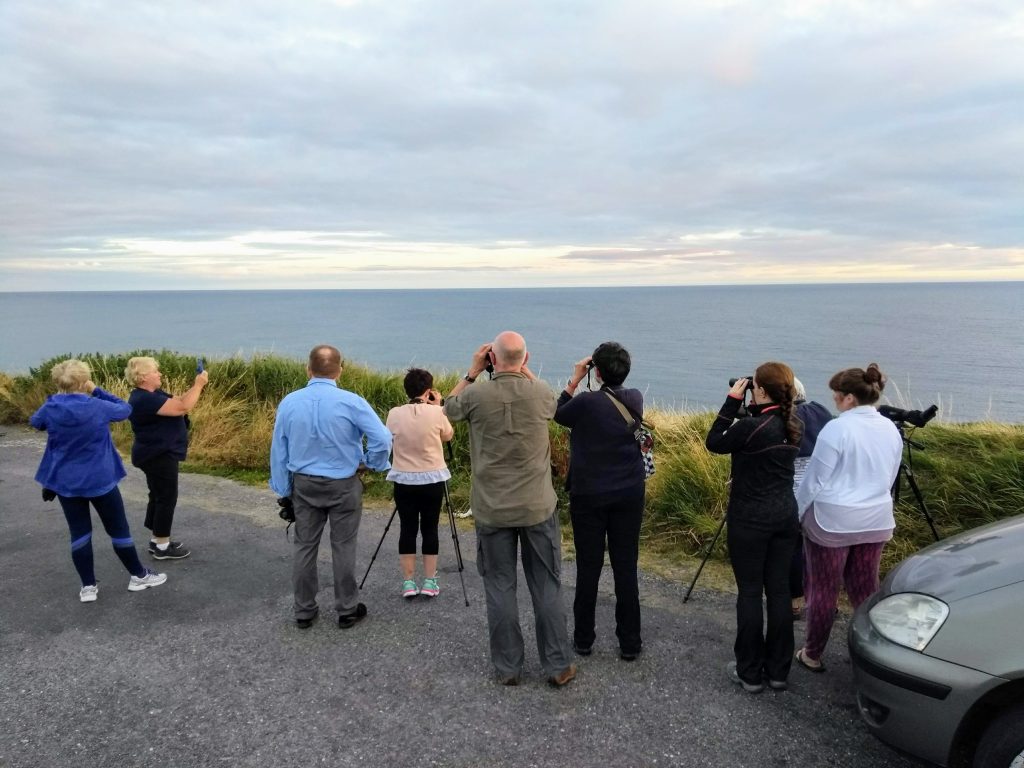 At first, it all seemed bit quiet, but before long I picked up the telltale splashes of common dolphins feeding offshore, I focussed my scope on the activity and then, there it was: a telltale plume of vapour, then another nearby. The characteristic bushy blows of two humpback whales feeding with the dolphins. Although the animals were some way offshore, the blows were clearly visible with binoculars, and once you knew where to look, even with the naked eye. Through the scopes, we could see the arch of the animals’ backs as they broke the surface.

Then we picked up more blows slightly east and a little further offshore: the tall, columnar vapour plumes of fin whales. In the calm conditions, the fin-whale blows hung in the air for what seemed an eternity, making it easy for our full complement of guests to see them clearly through their binoculars.

Within the hour we’d spotted three cetacean species from shore — along with Chough and Fulmar soaring along the clifftop in front of us, small mixed flotillas of Guillemots and Razorbills fishing in the bay, and Gannets and wheeling flocks of Shearwater further out. Everyone was buzzing. In the excitement, I got carried away and did what no guide should ever do: I mentioned we could be in with a chance of seeing “The Big 5”. 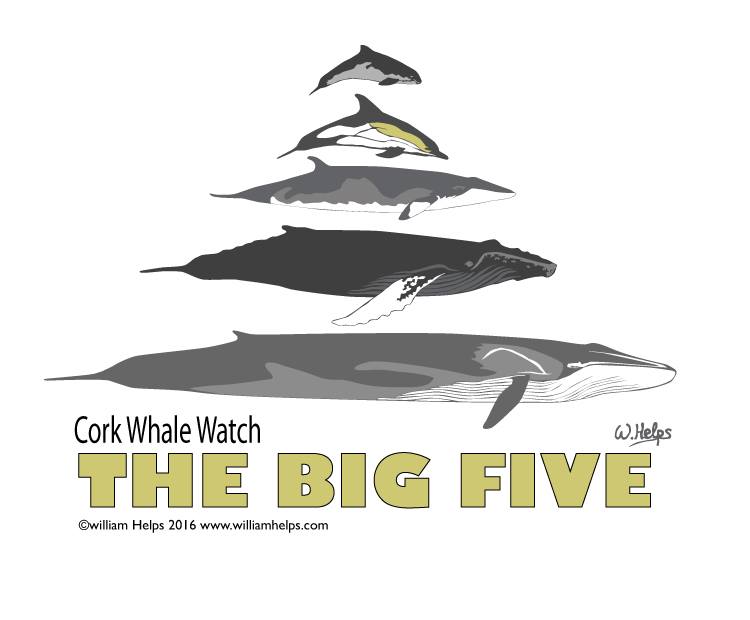 As the light began to fade, we returned to the hotel for a brief run-down of some of the wildlife we could expect to see along this stretch of the Irish coast over the weekend, followed by an optional night-walk to explore some of the creatures that emerge along the estuary after dark. 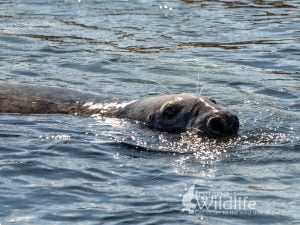 A large bull Grey Seal checking us out

The following morning, after a hearty breakfast at the hotel, we made our way down to Reen Pier, where we joined Ireland’s most experienced whale-watching skipper, Colin Barnes, aboard the Cork Whale Watch vessel, The Holly Jo. Once Colin had given the group a short introduction to the marine wildlife we’d be looking for, and the obligatory safety briefing, we were on our way.

Atlantic Grey Seals greeted us at the aptly named Seal Rock, along with large numbers of Shags. Fulmars and Gulls covered nearby High Island, but the auks (Razorbills and Guillemots) had already left their nest sites with their youngsters for life on the open water. Without further ado, Colin turned the Holly Jo for where we’d spotted the whales the evening before, gunned the twin John Deere engines and headed offshore.

The first cetacean species of our whale-watching extravaganza was the diminutive Harbour Porpoise. These small, boat-shy cetaceans have been proving elusive this season, so it was good to spot three or four small groups on our way out. Next up were Short-beaked Common Dolphins. They did their usual thing of making straight for the boat for a spot of bow-riding. Always crowd pleasers, their sheer exuberance is contagious. 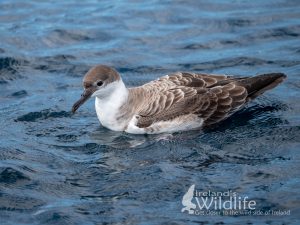 Then we picked up activity in the distance — splashing as groups of dolphins herded forage fish into a tight bait-ball. Wheeling clouds of shearwaters were in attendance — hundreds of Manx Shearwaters, were joined by dozens of Sooty Shearwater and good numbers of Great Shearwater along with clouds of Kittiwakes all getting in on the dolphin-driven action. And then in came the Minke Whales, several of them, lunging through the bait-ball at speed gulping up mouthfuls of small fish.

A blow erupted from the water a little way off — too tall and powerful for a humpback… a Fin Whale, the second largest animal on earth, attracted by the feeding activity, was making a bee-line for the dolphin bait-ball. 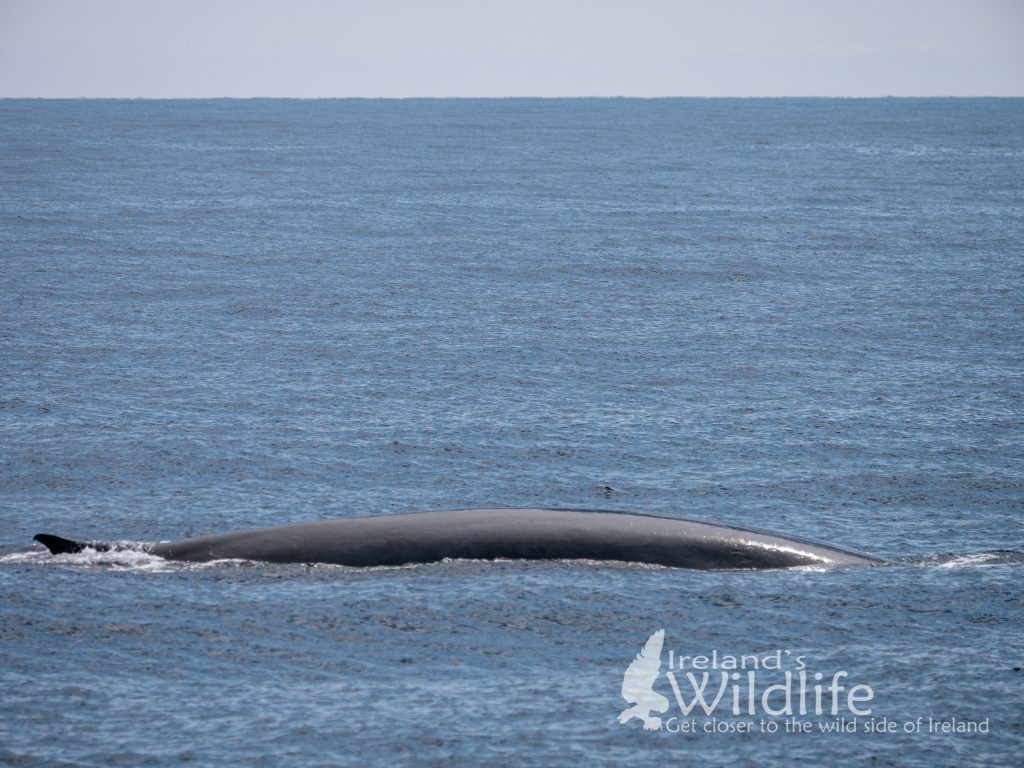 The enormous back of a fin whale making a bee-line for one of the bait-balls being rounded up by common dolphins off the coast of West Cork.

We stayed watching the feeding action and counted four fin whales in all, along with about six to eight minke whales and 30-40 common dolphins (these were small numbers of both minke whales and dolphins compared to recent tallies, but nobody on board was complaining — the excitement was palpable).

Four species down, one to go! We still needed a Humpback for “The Big 5”. 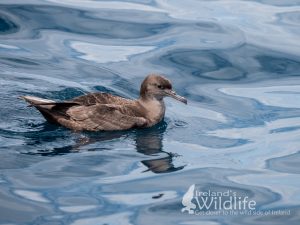 A Sooty Shearwater from our Discover Wildlife Weekend

With some reluctance, we left the Fin Whales, Minkes and Common Dolphins to their feast, and headed west. We passed a few small pockets of feeding activity as we motored: more dolphins, minke whales and seabirds, but we moved on, all eyes scanning the horizon for that signature bushy blow.

Then a shout from the roof-top viewing platform: “Blow”! Colin changed course, and everyone scoured the water ahead… there it was again… unmistakeably a Humpback blow. Over the next 40 minutes or so the Humpback treated us to some incredible views as it surfaced near the boat, showing off those diagnostic giant white pectoral flippers, periodically raising its tail-flukes as it dived in characteristic humpback fashion. 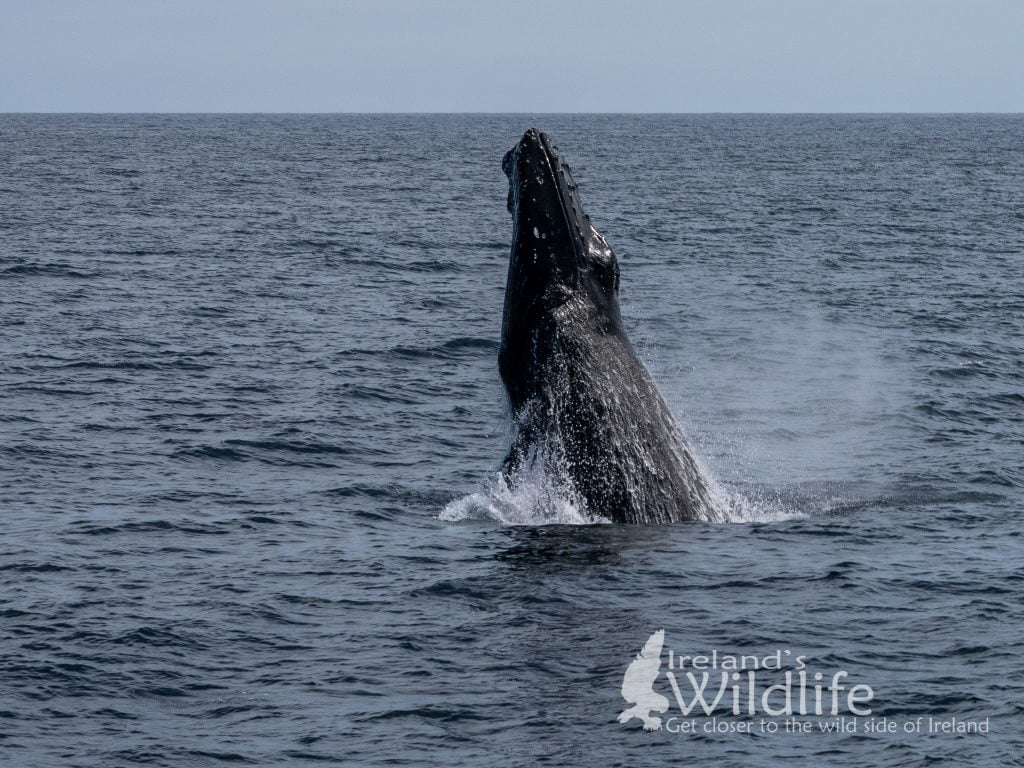 All too soon our four hours on the water was coming to an end… it would soon be time to head for land. Almost as if to bid us farewell, the Humpback (since identified as HBIRL75 in the Irish Whale and Dolphin Group’s Humpback Whale ID Catalogue) put on an amazing display of breaching and tail slapping.

What an end to an incredible trip.

All change: from whales to woodland! 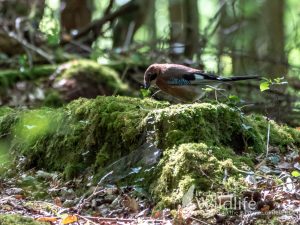 The entire group was buzzing as we got off the boat in Reen Pier. We stopped for a coffee in nearby Union Hall to reground ourselves before heading off for more wildlife watching. After being out on the water I always like to include a woodland wildlife walk — the contrast is wonderful.

We went from Minke Whales, Fin Whales and Humpbacks to Silver Washed Fritillaries, Treecreepers and a lovely encounter with a family of Irish Jays. The variety of habitats and wildlife you can encounter in a day along the West Cork coast is astonishing.

That night, at our group dinner at the hotel, we recapped on a wonderful day and enjoyed some fabulous food from the newly revamped menu at the Celtic Ross, which drew high praise from our guests. 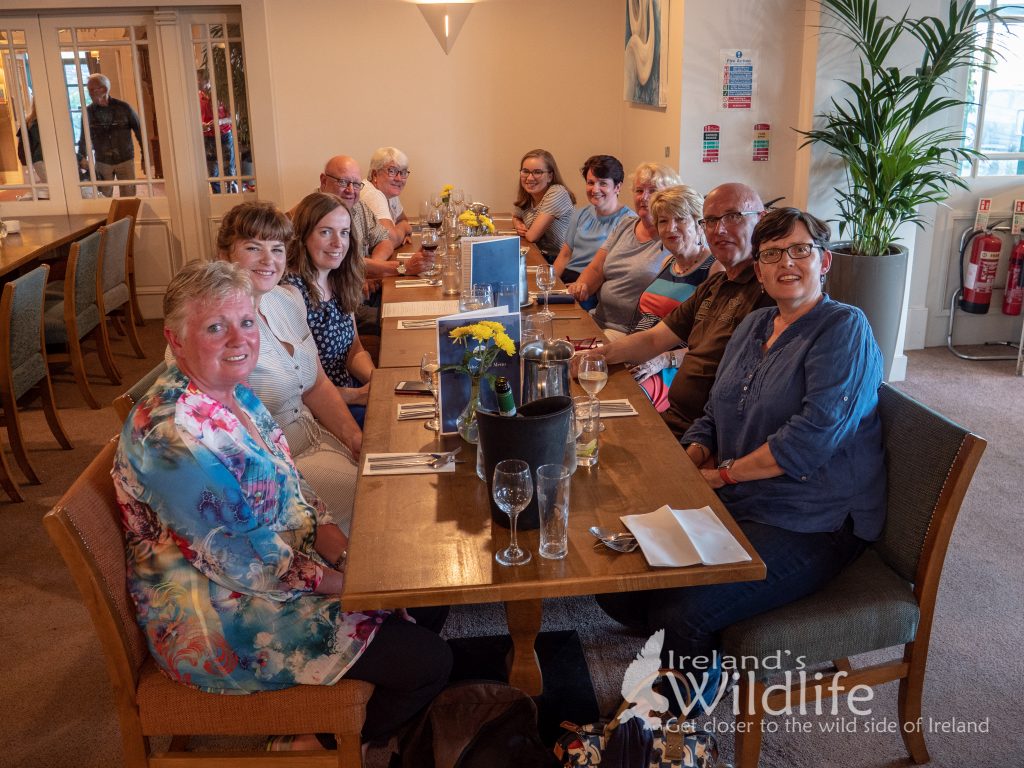 Everyone was still buzzing after an incredible day of wildlife watching when we called it a night.

On Sunday we took a walk from the hotel to take in a variety of different habitats around Rosscarbery, adding Spotted Flycatcher, Fox, Buzzard, Kestrel, Sedge Warbler, Whimbrel, Dunlin, Ringed Plover and Black Guillemot, among others, to the trip list before returning to the hotel at lunchtime to wrap things up and say our goodbyes.

I won’t say it was our best ever wildlife weekend — they’re all memorable and unique in their own way — but it’s certainly up there with the best of them… and scoring “The Big 5” is always a little bit special.

If you’d like to join us on the West Cork Coast check out our 5 night/6 day signature Ireland’s Wild South Coast tour, our shorter 3 night/4 day West Cork Wildlife Taster or our dedicated Autumn Migration birding tour in early October. And of course there are our Discover Wildlife Weekends. 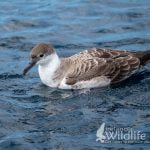 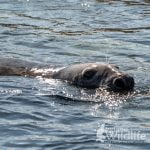 A large bull Grey Seal checking us out 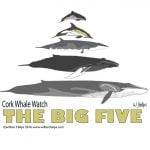 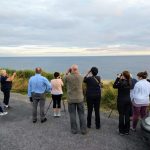 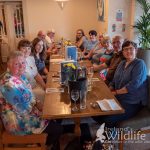 Discover Wildlife Weekend Guests at the group dinner in the Celtic Ross Hotel. 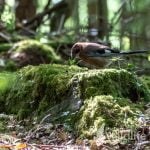 We had a lovely encounter with a family of Irish Jays in the woodland at Dromillihy. 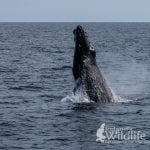 There are few things more jaw-dropping than a humpback clearing the water. 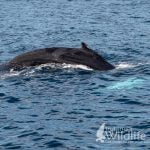 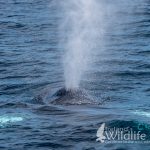 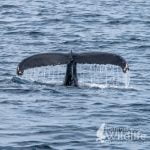 Humpback Whale HBIRL75 fluking. Shots of the underside of the tail flukes allow us to identify individual animals. 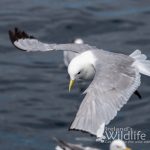 Kittiwakes are such stunning birds when you get close up views. 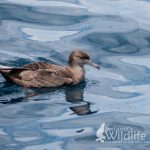 A Sooty Shearwater from our Discover Wildlife Weekend 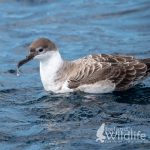 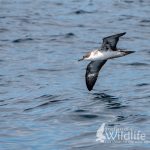 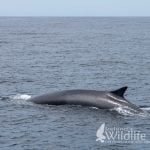 A fin whale surfacing off the West Cork coast of Ireland 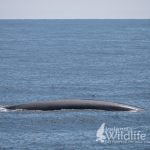 A fin whale attracted to one of the baitballs being rounded up by common dolphins off the coast of West Cork.